Memorial to The First Icelandic Glacier Lost to Climate Change

Next month, August 2019, a team of researchers and geologists from Rice University in Houston, along with members of the Icelandic Hiking Society and participants of the Un-Glacier Tour, will trek to Borgarfjörður, in western Iceland, to hold a funeral of sorts for a large glacier that once sat heavily on the mountainside. This glacier, known as Okjökull, once spanned 38 square kilometer but now has shrunk to barely one square kilometer of ice—too small to be called a glacier. Five years ago, the Icelandic Meteorological Office struck its name out from the books, officially declaring the Okjökull dead. 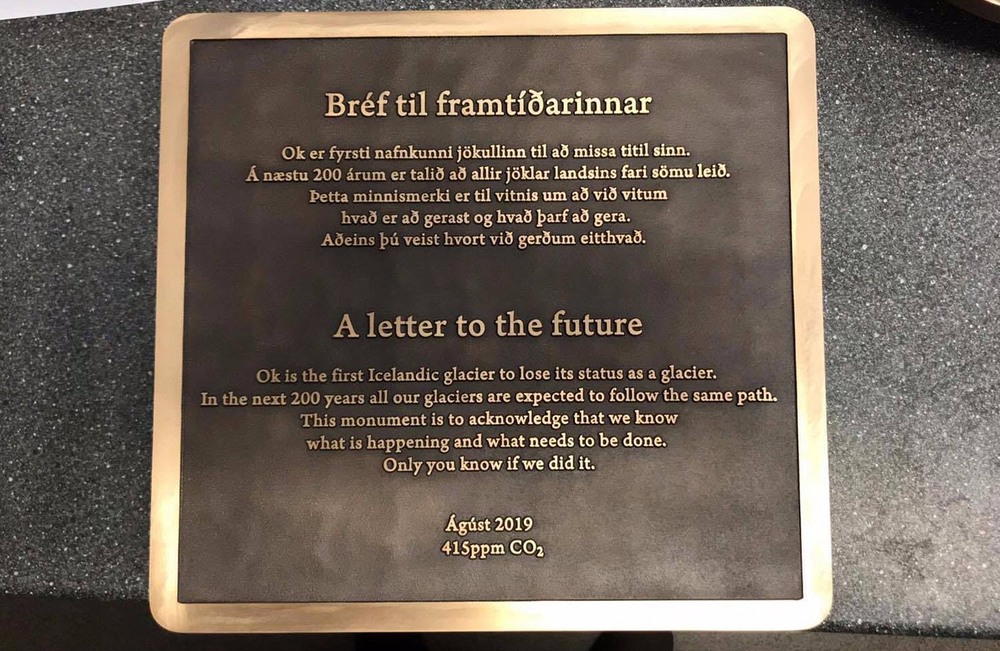 Now this team of hikers plan to install a memorial plaque at the site of Okjökull, or Ok glacier. The plaque, which bears a message to future readers, reads:

Ok is the first Icelandic glacier to lose its status as a glacier. In the next 200 years all our glaciers are expected to follow the same path. This monument is to acknowledge that we know what is happening and what needs to be done. Only you know if we did it.
August 2019415 ppm CO2

The gut-punching eulogy was written by Rice University researcher and author Andri Snær Magnason. The figure “415ppm CO2” indicates the concentration of carbon dioxide—the gas responsible for the rise in global temperatures—in the atmosphere as of May 2019. The last time atmospheric carbon dioxide was this high was more than 3 million years ago, when temperature was 2°–3°C higher than during the pre-industrial era, and sea level was 15–25 meters higher than today.
Last June was the hottest June ever recorded in Europe, since records began in the mid-1800s. Next year is probably going to be hotter. But hotter summers are just the tip of the iceberg. As global temperatures continue to rise, the most affected will be marine life as the oceans hold the majority of the heat in the earth ecosystem. Warmer waters will affect the distribution, reproduction and availability of marine life, which will have unpredictable effects on the marine food web. Increase in carbon dioxide in the atmosphere will also make oceans more acidic, further affecting the biodiversity. Melting glaciers will decrease the salinity of ocean water, which will affect ocean currents. This in turn will have catastrophic effect on rainfall patterns across the world.

When Okjökull lost its status as a glacier back in 2014, media outlets deemed the news small enough to warrant no international coverage, no outrage. This surprised Cymene Howe, an associate professor of anthropology at Rice University. “I was disturbed and intrigued by this story of this little glacier that had been destroyed with little fanfare,” Howe said.
In 2018, Howe and her colleague Dominic Boyer, produced a documentary titled “Not Ok”, on the subject of the melted glacier. Towards the end of its making, Howe and Boyer realized that Ok deserved some kind of memorial to its passing, as a “symbolic and political statement” about the radically transforming environment around the world.
The memorial plaque will now be the first monument to a glacier lost to climate change anywhere in the world.
“By marking Ok’s passing, we hope to draw attention to what is being lost as Earth’s glaciers expire. These bodies of ice are the largest freshwater reserves on the planet and frozen within them are histories of the atmosphere. They are also often important cultural forms that are full of significance,” Howe said.
Although Ok is the first lost glacier to be honored by a memorial, it’s certainly not the first glacier to be lost by climate change. Geologist Oddur Sigurðsson, who has been observing glaciers since 2000, counted 56 glaciers that have ceased to be. If this continues, Iceland will lose all its 400-plus glaciers by the year 2200.


“A memorial isn’t for the dead. It’s for the living—it’s to come together after a loss,” said Boyer, to which Howe added: “With this memorial, we want to underscore that it is up to us, the living, to collectively respond to the rapid loss of glaciers and the ongoing impacts of climate change. For Ok glacier it is already too late; it is now what scientists call ‘dead ice.'”