AOC: ‘At Point Of No Return’ On Impeachment; Trump ‘Clearly Believes In Eugenics’ 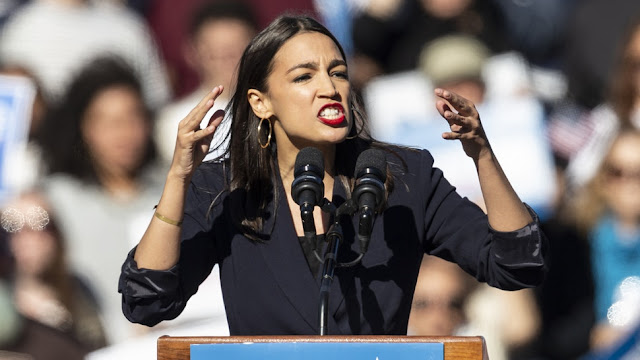 Socialist Rep. Alexandria Ocasio-Cortez (D-NY) declared during an interview on Tuesday afternoon that Democrats were at “the point of no return” on impeachment and that she believes that President Donald Trump “clearly believes in eugenics.”

“Yeah, I’m, well, clearly momentum is build[ing],” Ocasio-Cortez told Yahoo News. “We’re kind of knee-deep here in impeachment inquiry and so um, you know, at this point I think we’re beyond the question as to whether Trump has committed a crime or whether he has violated the Constitution.”

To this point, there has not been any evidence presented that the president committed any crimes, which multiple impeachment witnesses have testified to under oath, including Ambassador Marie Yovanovitch, Senior NSC official Tim Morrison, and Ambassador Kurt Volker.
“He has clearly engaged in extortion and bribery,” Ocasio-Cortez continued, apparently ignoring the testimony of those who have testified. “Question is, how many other people in this administration have been engaged in similar and who are implicated in this behavior and in this plot reap rather and I think that’s part of the question that we’re getting to the bottom of today.”
“It’s not just Trump, but who else is going to be implicated in this and so, you know, I think when it comes to what we’ve discovered, we’re at the point of no return and it’s just a question of how many crimes have been potentially committed and who else has committed them,” Ocasio-Cortez added.
Ocasio-Cortez then claimed that Trump “clearly thinks that, clearly believes in eugenics” because he employs Senior White House Adviser Stephen Miller.
“I think the most clear and disturbing of them all is the fact that Stephen Miller has just been exposed as frankly a neo-Nazi and a white supremacist,” Ocasio-Cortez said. “He was citing eugenics as the rationale for our policy in the southern border and Donald Trump clearly thinks that, clearly believes in eugenics, given the fact that he has put and maintained Stephen Miller in a position of power after these revelations.”
WATCH:

Yahoo News ✔@YahooNews
AOC says impeachment inquiry is 'at the point of no return' in interview with Yahoo News https://yhoo.it/2QyXUJf  by @hunterw 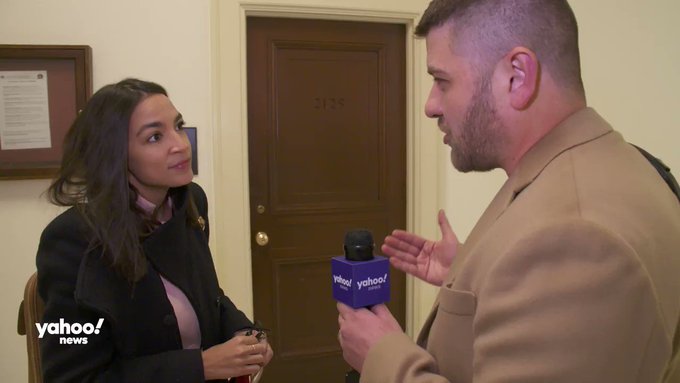 42 people are talking about this
There are multiple problems with Ocasio-Cortez’s claim, the biggest of which is that she is not telling the truth.
Ocasio-Cortez is referencing a recent report from the Southern Poverty Law Center that featured leaked emails from Miller in which he expressed support for former President Calvin Coolidge’s immigration policies, specifically his low immigration quota.
The New York Times reported:

On Aug. 4, 2015, Mr. Miller sent an email supporting the idea of a complete ban on immigration “like Coolidge did,” an apparent reference to the 1924 law. As a result of those new “national origin quotas,” immigration fell by half and the arrival of Italians and Poles fell by 90 percent. Mr. Sessions, Mr. Miller’s boss at the time, was known for publicly praising Coolidge’s policies because he believed they had bolstered American wages.
The 1924 law endorsed by Coolidge is widely seen today as a symbol of bigotry and was heavily influenced by the eugenics movement.

An archive of The Immigration Act of 1924 on the U.S. State Department’s website noted that the law “limited the number of immigrants allowed entry into the United States through a national origins quota. The quota provided immigration visas to two percent of the total number of people of each nationality in the United States as of the 1890 national census. It completely excluded immigrants from Asia. … In all of its parts, the most basic purpose of the 1924 Immigration Act was to preserve the ideal of American homogeneity.”
The New York Times further reported:

Mark Krikorian of the Center for Immigration Studies, whose work Mr. Miller has often referred to in White House policy discussions, said that Coolidge had a “complicated” legacy. “He reached the right result” — meaning low immigration — “but in the wrong way.”

A 2017 press conference in which Miller humiliated CNN’s Jim Acosta provides potential clues into what Miller’s thoughts are on the matter:

Acosta: But this whole — this whole notion of, “Well, they could learn — you know, they have to learn English before they get to the United States,” are we just going to bring in people from Great Britain and Australia?
Miller: Jim, it’s — actually — I honestly say I am shocked at your statement that you think that only people from Great Britain and Australia would know English. It’s actually — it reveals your cosmopolitan bias to a shocking degree, that in your mind… No, this is an amazing — this is an amazing moment. This is an amazing moment, that you think only people from Great Britain or Australia would speak English. It’s so insulting to millions of hard-working immigrants who do speak English from all over the world.
Acosta: So there are — of course, there are people who come…
Miller: But that’s not what you said. And it shows — it shows your cosmopolitan bias.
Acosta: This sounds like you’re trying to engineer the racial and ethnic flow of people into this country through policy.
Miller: That is one of the most outrageous, insulting, ignorant and foolish things you’ve ever said. And for you, that’s still a really — the notion that you think that this is a racist bill is so wrong and so insulting.

CSPAN ✔@cspan
Full exchange between Stephen Miller & @acosta on Statue of Liberty & immigration. "It reveals your cosmopolitan bias to a shocking degree." 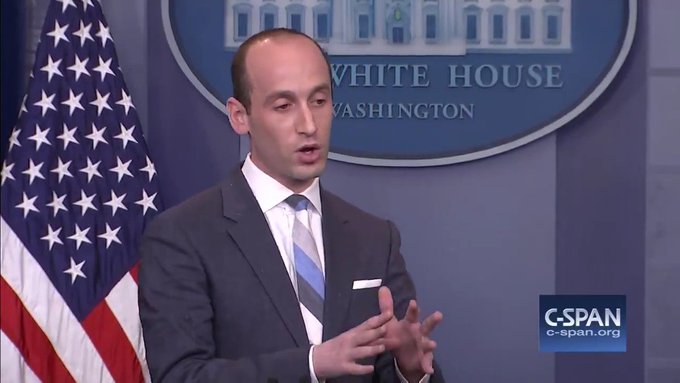 9,008 people are talking about this
In the exchange with Acosta, Miller made no mention of wanting to restrict people by race or ethnicity and actually slammed Acosta for suggesting that is what he was proposing.
So, is it possible that Miller cited Coolidge only because he liked the low immigration numbers?
Buried 20 paragraphs into its report, The New York Times reported:

In his communications with Breitbart, Mr. Miller does not explicitly endorse the national origin quotas, but he praises Coolidge and his legacy.

Ocasio-Cortez’s entire claim that Miller is a “neo-Nazi” hinges on the fact that he favors lowering the number of immigrants that are entering the United States and he cited former President Calvin Coolidge.
Ocasio-Cortez, who has falsely stated that immigrant detention facilities are “concentration camps,” suggested last week on MSNBC that Miller has “weaponized” being Jewish to “provide the cover” to operating concentration camps because he’s a Nazi — a claim that tinges on being an anti-Semitic conspiracy theory.
WATCH:

Ryan Saavedra ✔@RealSaavedra
Ocasio-Cortez, who has falsely stated that immigrant detention facilities are "concentration camps," suggested last week on MSNBC that Miller has "weaponized" being Jewish to "provide the cover" to operating concentration camps because he's a Nazi 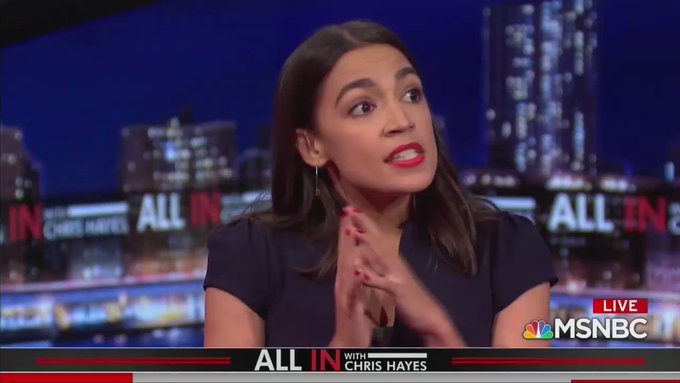 5,329 people are talking about this
Miller responded to Ocasio-Cortez’s false claim earlier this year, which prominent Jews said made her a “Holocaust denier,” by saying, “As a Jew … I am profoundly outraged by the comments from [AOC]. It is a historical smear. It is a sinful comment. It minimizes the death of 6 million of my Jewish brothers and sisters. It minimizes their suffering…”
WATCH:

Ryan Saavedra ✔@RealSaavedra
Stephen Miller on Ocasio-Cortez's Holocaust trivialization: “As a Jew ... I am profoundly outraged by the comments from [AOC]. It is a historical smear. It is a sinful comment. It minimizes the death of 6 million of my Jewish brothers and sisters. It minimizes their suffering...” 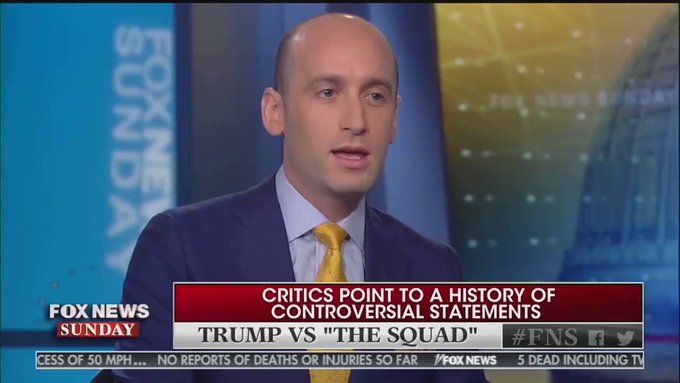 1,502 people are talking about this
Ocasio-Cortez has repeatedly sympathized and defended notorious anti-Semites Reps. Ilhan Omar (D-MN) and Rashida Tlaib (D-MI), British Labour Party Leader Jeremy Corbyn, and far-left activist Linda Sarsour.
Omar and Tlaib were recently banned from entering Israel because they were planning on meeting with organizations that supported terrorism against Israel and because they were going to meet with organizations that promoted neo-Nazi screeds.
While Miller liked Coolidge, Ocasio-Cortez likes former Democrat President Franklin Delano Roosevelt, who racially profiled American citizens and threw those of Japanese decent into internment camps.
FDR also refused to let Jewish refugees who were fleeing Nazi Germany into the United States, who then were forced to return to Europe where many of them died at the hands of Nazis.