Duck Commander Phil Robertson Brings Down the House at Trump Rally in Louisiana: 'I Got It Down to This'

He was a man of few words, but every one of them counted.
When Phil Robertson, patriarch of the “Duck Dynasty” clan took the stage at a Republican campaign rally in Monroe, Louisiana, on Wednesday night, he had only a short message for the assembled crowd.
But for the cheering throng that filled the Monroe Civic Center, it was more than enough bring down the house.
Appearing on stage with President Donald Trump, Robertson summed up his outlook in one sentence.
And it couldn’t have pleased his audience more.
“I got it down to this,” Robertson said. “If you’re pro-God, and pro-America, and pro-gun, and pro-duck hunting, that’s all I want.”

"If you're pro-God and pro-America and pro-gun and pro-duck hunting, that's all I want." 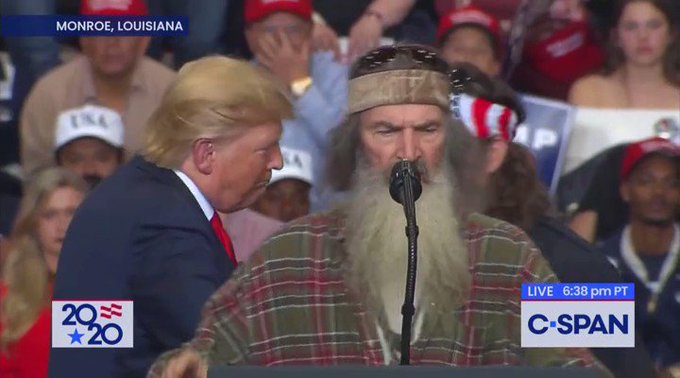 1,454 people are talking about this
That’s not a message that would resonate in blue states, of course — pro-God, pro-gun and pro-America is about as far away from the positions of the Democratic primary candidates as it’s possible to be.
(Try imagining Elizabeth Warren, Bernie Sanders or Joe Biden ever uttering those words — or anything like them.)
But the social media response was just as rapturous as the roar from the audience in Louisiana.

"If you're pro-God and pro-America and pro-gun and pro-duck hunting, that's all I want."

Isabel Brown@theisabelb
· Nov 7, 2019
Phil Robertson of @DuckDynastyAE & @BlazeTV with the quote of the year as we head into #2020Election!

“If you’re pro-God, and pro-America, and pro-gun, and pro-duck hunting, that’s all I want!”

Not all heroes wear capes 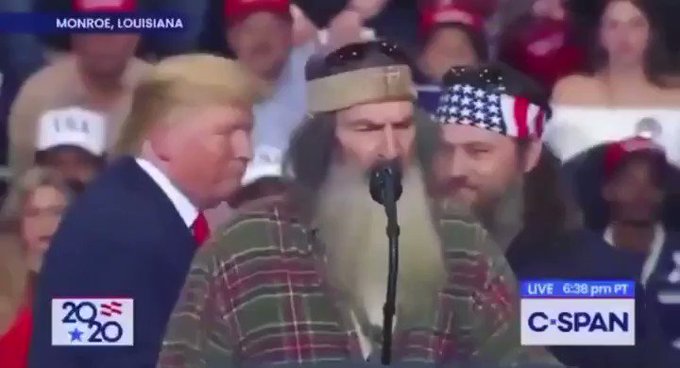 Brent McHenry@McHenryBrent
Here’s the thing: the average American, I for one, is more like Phil Robertson than Leo DiCaprio regardless of what we are told we think.
24
6:18 PM - Nov 7, 2019
Twitter Ads info and privacy

See Brent McHenry's other Tweets
Now, since conservatives don’t march in the lockstep that liberals live in, there were some dissenters, mainly with gripes about Trump’s endorsement — immediately after the August mass shootings in El Paso, Texas, and Dayton, Ohio — of “red flag” laws that could disarm a law-abiding American without due process.
There are plenty of conservatives who agree that Trump was out of line there, but there’s no denying that Trump is more pro-Second Amendment than any potential rival on the Democratic side will ever be.
Robertson and his family became an American sensation when the Louisiana-based “Duck Dynasty” program ran on A&E from 2012 to 2017, and, thanks to Robertson’s continued writing and public speaking, that fame has never gone away.
His presence on the platform with Trump in support of Republican businessman Eddie Rispone’s campaign to replace Democratic Gov. Jon Bel Edwards sent a message as clear as his words:
When voters go to the polls in Louisiana on Nov. 16, they need to be voting Republican.
And when Americans go to the polls on Nov. 3, 2020, they need to be doing the same.