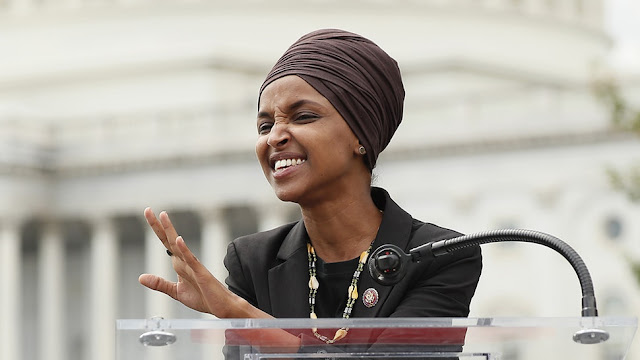 Rep. Ilhan Omar (D-MN) sided with the embattled socialist leaders of Venezuela and Cuba, calling the resignation of Bolivia’s Evo Morales a “military coup.”
The controversial Minnesota Democrat made the statement on Sunday night, hours after Morales announced that he was stepping down as Bolivia’s president amid national unrest over an allegedly fixed election. Morales, who was swept to power in 2006 in the “pink wave” that saw communists and socialists take over control of several South and Central American nations, held an iron grip on power in Bolivia for 14 years.
Omar called the resignation a coup, and, ironically, claimed that the Bolivians deserve “free and fair elections” — something Morales’ opponents said was impossible while Morales was still in power.

Ilhan Omar ✔@IlhanMN
There's a word for the President of a country being pushed out by the military. It’s called a coup.

17.7K people are talking about this
Morales left office (and, presumably, Bolivia) on Sunday after weeks of violent unrest following a contentious election that the Organization of American States now says suffered from fatal irregularities. Morales, who was vying for a fourth term, called off counting votes just 24 hours after most Bolivians cast their ballots, apparently concerned that he would not win.
An investigation into the election is ongoing, but the OAS pointed to significant errors, major corruption, and clear signs that Morales was attempting to fix the outcome to hold on to power.
The Bolivian military pushed Morales to resign after demonstrations grew dangerous and took the lives of at least three protesters. Police and military ultimately refused to quell the popular uprising and protect Morales.
Currently, the military is instituting martial law, but Morales’ opposition has strong leadership, and a decision is reportedly being made as to who among their leadership should assume power pending another election. The situation is fluid and the U.S. State Department is keeping a close eye on developments.
Omar’s response, of course, fails to take into account the popular aspect of Bolivia’s political situation, preferring instead to assume that the change in power came up suddenly and inorganically, rather than as a result of longstanding frustration with Morales’ government — or even a sudden, recent shift in economic prosperity for those Bolivians not connected to positions of power.
Unsurprisingly, Omar echoed Morales, as well as the governments of Venezuela and Cuba — the two socialist governments left, aside from Bolivia — in calling what took place a “coup.”
“The world and our Bolivian patriots repudiate the coup,” Morales tweeted. ‘They moved me to tears. They never abandoned me. I will never abandon them.”
“The world must be mobilized for the life and freedom of Evo,” Cuba’s president said in a statement Monday. Venzuelan president Nicolas Maduro, who faced a similar uprising over the summer yet held on to power, also called the transition of power a “coup.”
Omar is also likely echoing her own previous statements about regime change in South America. During the violent uprisings in Venzuela, which took place after the socialist government there allowed the electric grid to collapse, plugning millions into darkness and abject poverty, Omar blamed the United States for Venezuela’s difficulties, claiming that American “bullying” and “sanctions” were responsible for the socialist nation’s collapse, not a brutal dictator.
She also told a foreign journalist, during the uprising in Venezuela, that the United States was providing humanitarian aid as cover for intervention and even invasion.


“What we should be involved in is having diplomatic conversations and bringing people to the table and being a partner in facilitating that. But we are threatening, we are threatening intervention. We’re sending humanitarian aid that is in the guise of, you know, eventually invading this country and the people of the country don’t want us there,” she told Rolling Stone.