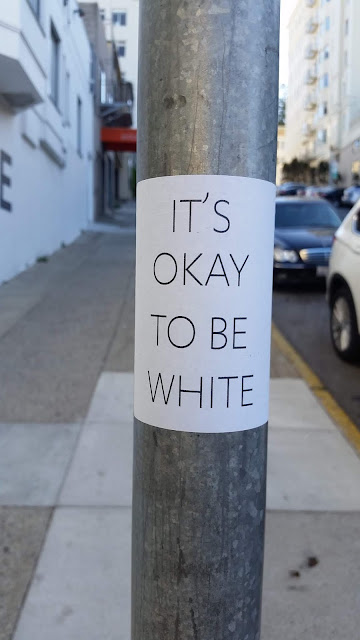 It's okay to be white" flyers were placed throughout East Tennessee State University's campus, including to cover a memorial for the school's first African American students.
ETSU President Brian Noland moved quickly Saturday to denounce the flyers and called it an attack on the campus and its values. Monday, Noland said in a statement that campus staff acted quickly to remove the flyers.
The school is one of several throughout the nation where groups have recently emailed or posted flyers with the slogan, which is used among racist groups. Incidents were reported in California, Connecticut and Oklahoma.
Noland said the flyers were identical to those placed on college campuses across the country by white supremacist groups "in an attempt to seed division and discord."
"We will respond to this attempt to sow seeds of division by carrying forward our work to support an inclusive and affirming campus," Noland said. "I am confident that we will continue to serve as a beacon of hope and inspiration for our region through our unwavering support for all of the diverse members of our university community."
Colleges throughout the country have sporadically experienced similar incidents in the past three years.
The "It's okay to be white" campaign was created by users of 4chan, a popular internet forum, according to the Anti-Defamation League. The saying was later spread by neo-Nazi groups and politically organized racists, including former Ku Klux Klan Grand Wizard David Duke.
White supremacist propaganda on college campuses has increased across the nation, according to a 2018 study by the Anti-Defamation League.
Since 2016, there were a recorded 346 incidents of white supremacist propaganda – flyers, stickers, banners and posters – appearing on college and university campuses.


The campaigns targeted 216 college campuses, from Ivy League schools to local community colleges, in 44 states. Several of them used the phrase "It's okay to be white" in their flyers, according to the study.
The study includes a 2018 incident in which racist flyers and social media posts were directed at Middle Tennessee State University's black student union.