Los Angeles Democratic Mayor Eric Garcetti and other city leaders recently broke ground on a permanent supportive housing complex that will use stacked shipping containers to house formerly homeless people.
The containers will be arranged into towers, then connected by walkways to create a single, unified building topped with rooftop terraces and gardens. They have been specifically manufactured as modular, prefabricated homes because building codes prevent the developer from using recycled containers.
According to the architect, the design was chosen “as a way to reduce the cost and construction time.”  However, KFI News reports that the project’s final price tag breaks down to about $600,000 per residential unit, noting the amount is “more than the median price of a condo” in L.A.
The $34 million “Isla de Los Angeles” development includes more than fifty furnished one-bedroom apartments along with retail spaces, a park, and a shared public street for farmers markets and other community events. Residents will also have onsite accessto social services like counseling, job training, and life skills workshops. 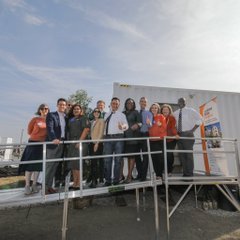 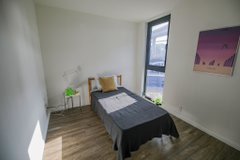 101 people are talking about this
“It’s always very expensive to build anything from the ground up,” said J.F. Mailander, a retired banker who has been a vocal critic of Garcetti’s housing policies. “This is why we used to simply buy old buildings to house people – it was the cheapest way to go. Profits had already been made, and the buildings had already turned a few times. But this is the very engine that has been fueling L.A. politics. Any new building gets architects, developers, contractors, labor unions, lawyers, activists, PR people, charitable agencies involved, and all find a way to give back to the political sponsor.”
Municipal leaders made more than 1,700 city-owned parcels available to affordable housing developers last year. The Architect’s Newspaper described many of these locations as “porous” and “leftover spaces” with “irregular geometries tucked in the margins of already-developed neighborhoods,” such as the triangular lot where the Isla shipping container complex is currently being assembled.
A spokesperson for Clifford Beers Housing, the non-profit developer leading the Isla project, told The Daily Wire “about 30%” of the funding (approximately $10.2 million) comes from a $1.2 billion bond measure known as Proposition HHH, which voters approved in November 2016. The initiative, championed by Garcetti, allowed for the construction of affordable housing for the homeless while also providing facilities for mental health care, drug and alcohol treatment, and other amenities.
Earlier this year, the Los Angeles Times reported that members of the citizen committee appointed to monitor the bond program were alarmed by the rising costs of building the new residences. The Times noted, “housing construction that hovered at $400,000 per unit before Proposition HHH is now routinely above $550,000 per unit – a rate that would exhaust Proposition HHH funds well short of the 10,000-unit goal.”
L.A. City Controller Ron Galperin released an audit last month that found the bond program had not produced a new unit of homeless housing since Prop HHH passed, even as the vagrant population rapidly increased throughout the region. The audit determined that more than 1,000 units of housing approved through the measure could exceed $600,000 apiece, partly due to“the high level of soft costs,” which “indicates that developers are spending large amounts on non-construction activities such as fees, consultants, and financing costs.” The soft costs for Isla are projected to be around $12 million, the developer said.
“We aren’t actually building housing cheaply; we are just simulating building cheap housing as expensively as possible,” Mailander said.


Mayor Garcetti said there are currently 21 projects under construction that have been funded by Prop HHH. The Isla development is expected to open in November 2020.