Mind the time gap: Evocative photos show a bygone era on the London Underground – when drivers smoked pipes and even the beggars wore suits

Furtive kisses, sleeping workers and Northern Line revellers; these evocative photos capture a bygone era on the London Underground - when drivers smoked pipes, beggars wore suits and Oyster cards were still a distant dream.
The black and white collection depict a moment in time before modernisation, when commuters could smoke in the coach and tickets were bought from machines for mere pennies.
Photographer Mike Goldwater captured the interactions on the Tube during the 1970s, recording the lives of the millions travelling across the capital each day.
Goldwater travelled from station to station for ten years looking to take a snapshot of a fleeting moment in time on the hectic underground service.
All walks of life were recorded, including school children, beggars, animals and lovers and feature in a new book, London Underground 1970-80. 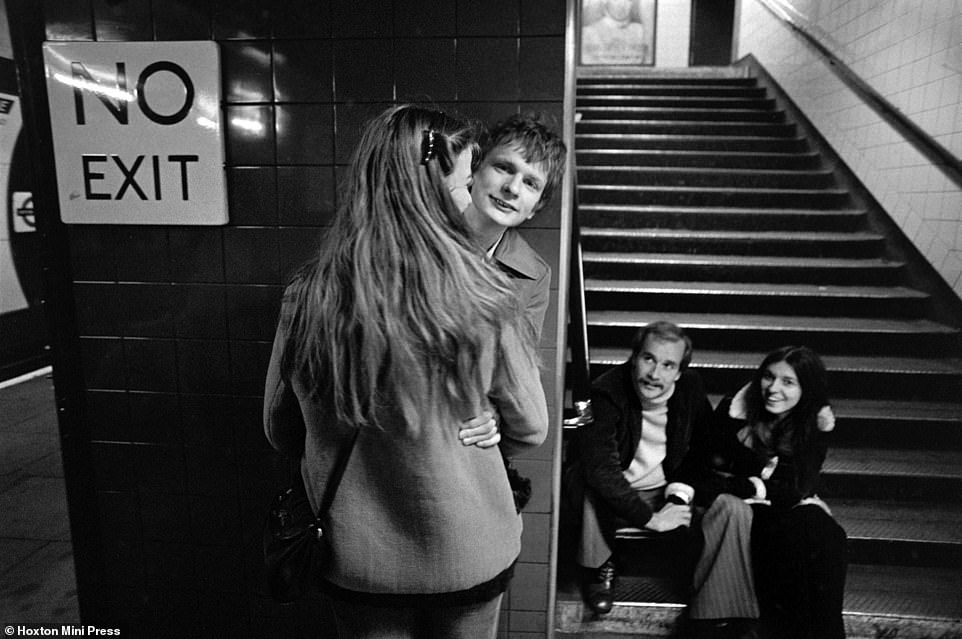 +13
Down in the Tube Station at Midnight: A couple embraces each other near the platform at Oxford Circus in 1979, while another pair watches on from the stairs nearby in a candid image captured by photographer Mike Goldwater. The collection captures a time before modernisation, when commuters could smoke and tickets were bought from machines for mere pennies 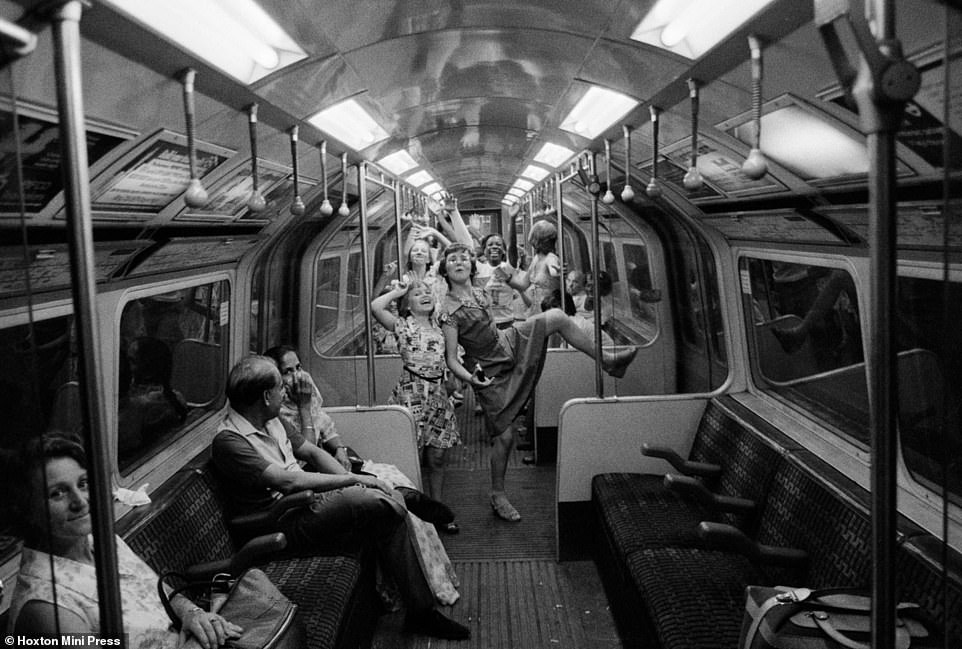 +13
Going Underground, 1974: Passengers on the Northern Line are captured in joyous revellery watched on by a couple. The photograph was taken a year before the tragic Moorgate crash which killed 43 people died and injured 74 after a train failed to stop at the line's southern terminus 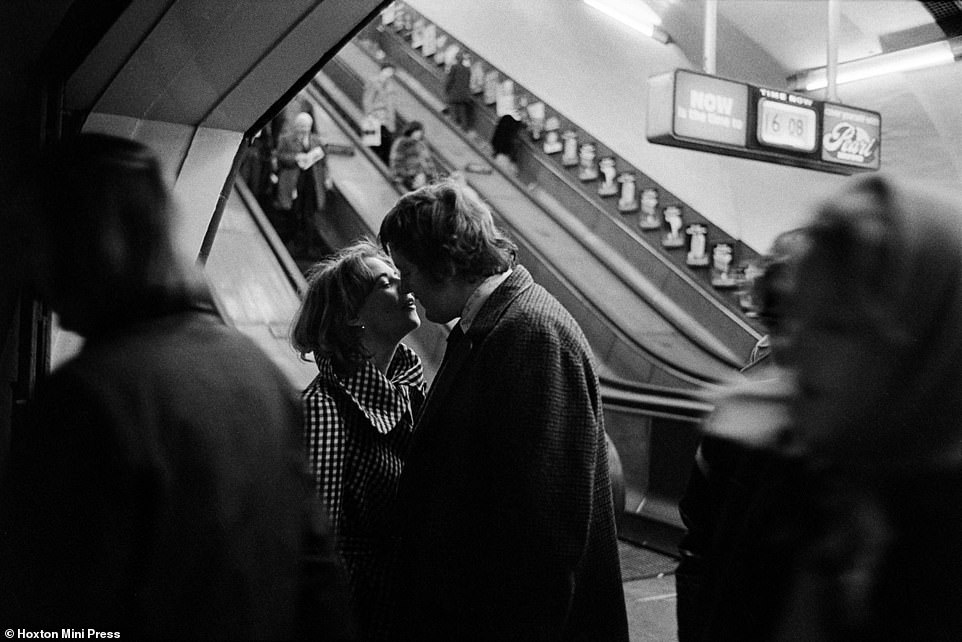 +13
A couple steal a fleeting kiss at Holborn in 1978 at the bottom of the escalators. It is one of a number of images captured by Goldwater for a new book featuring his photographs on the tube throughout the 1970s 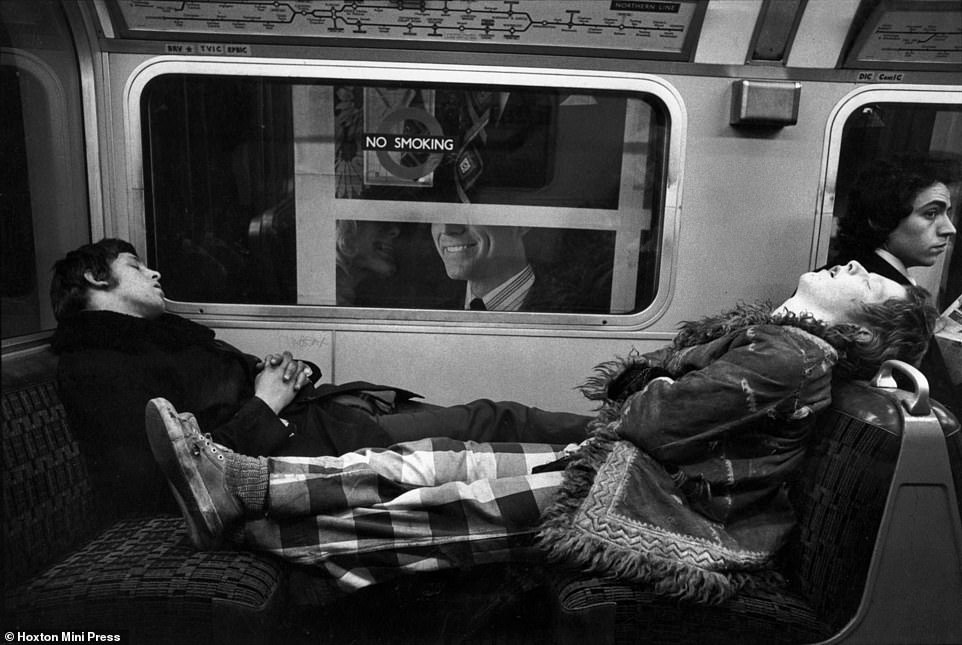 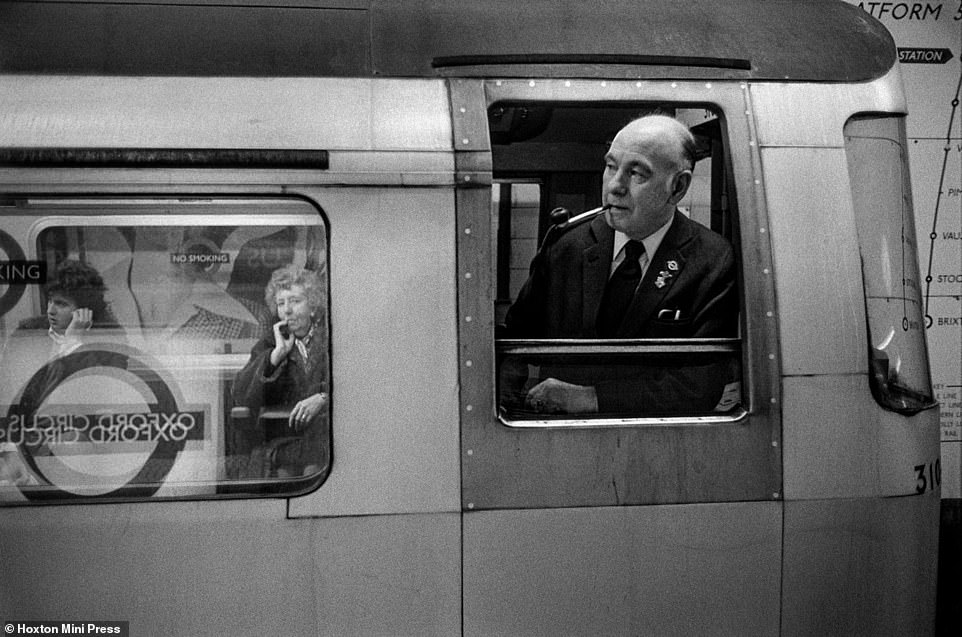 +13
A driver smokes a pipe as he pulls into Oxford Circus on the Victoria Line in 1978. Smoking was allowed in certain carriages on the underground until 1984. The ban was made permanent after the King's Cross fire in 1987 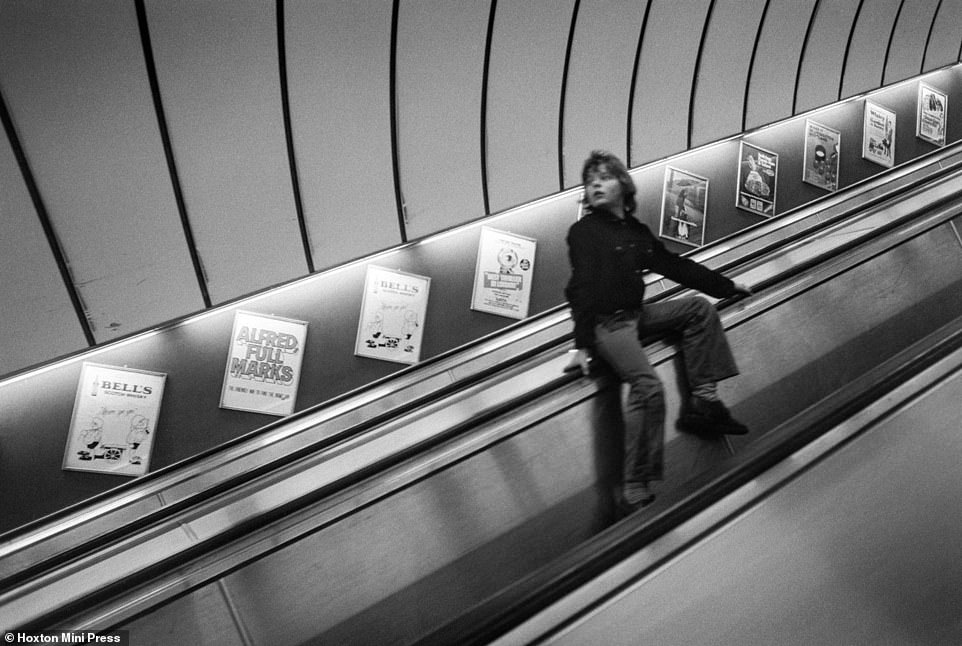 +13
A young boy in recognisably 1970s attire slides down the escalators at King's Cross in 1972, zooming past adverts on the wall for products such as Bell's Whisky 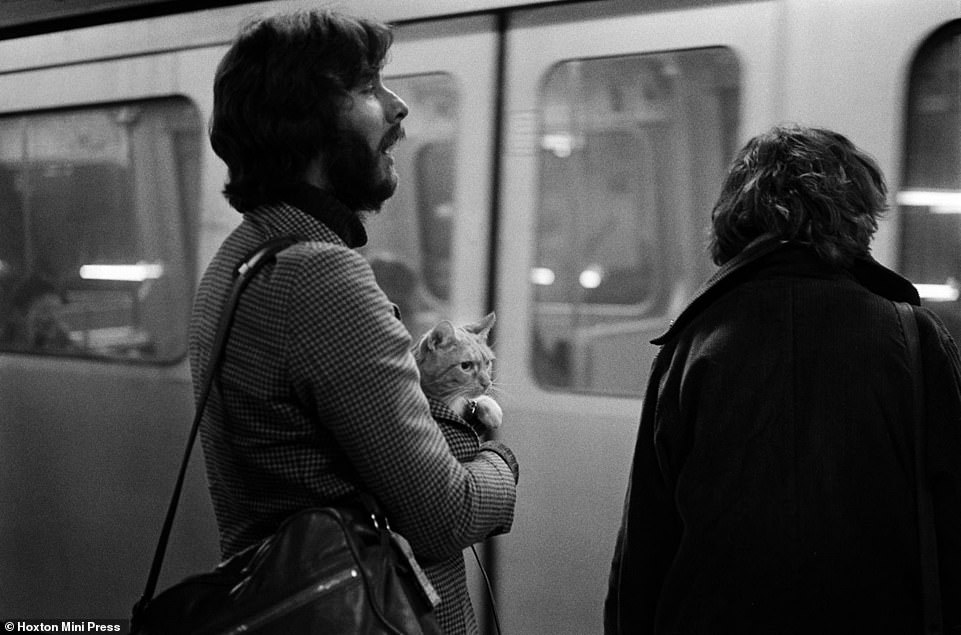 +13
Mind the cat! A bearded commuter carries a furry companion on to a tube at Baker Street in 1979. Cameras on the underground would have been a rare occurrence at the time 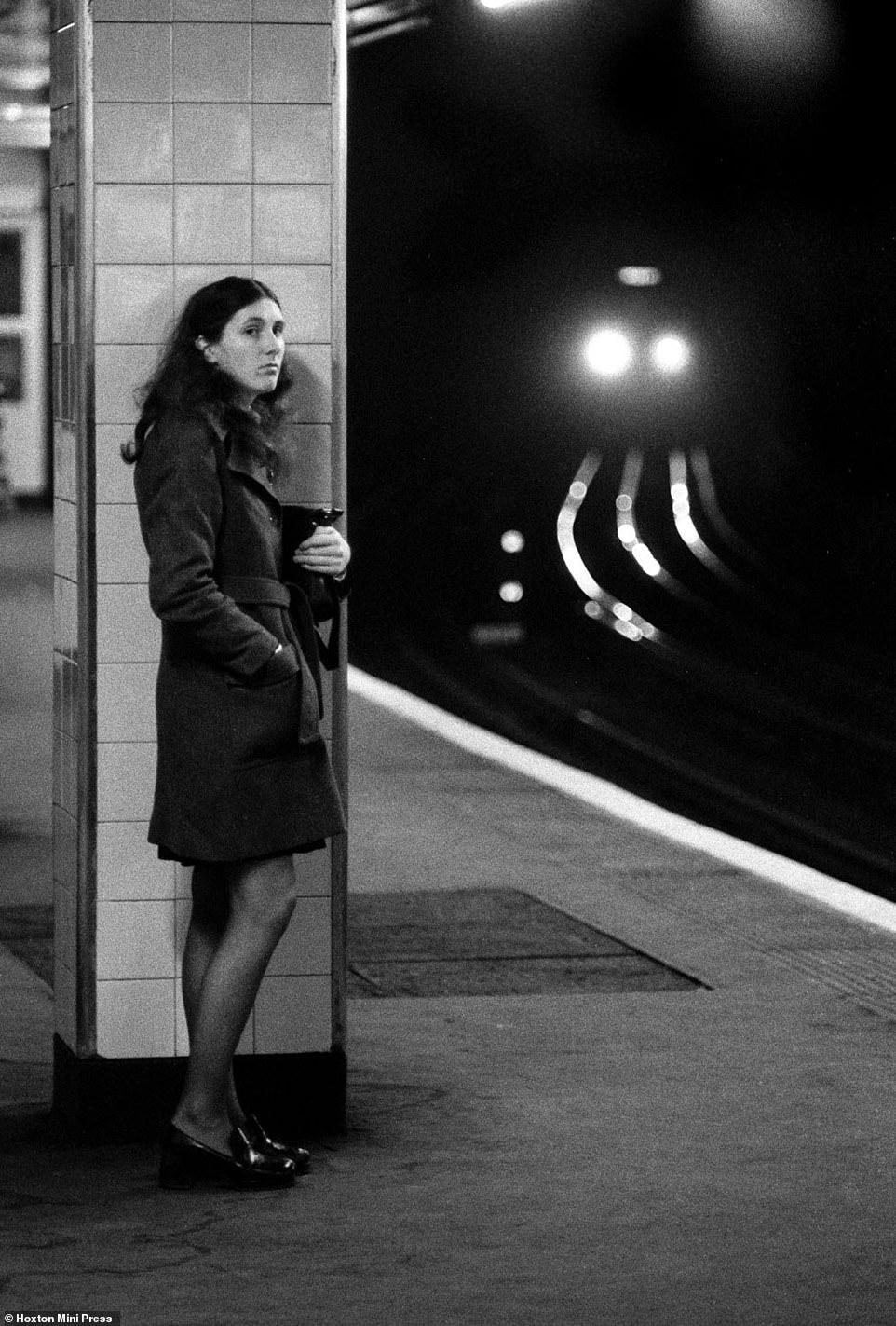 +13
A lone woman stands at the platform waiting for her train at Moorgate in 1973. It is one of a series of captivating images taken by the talented photographer 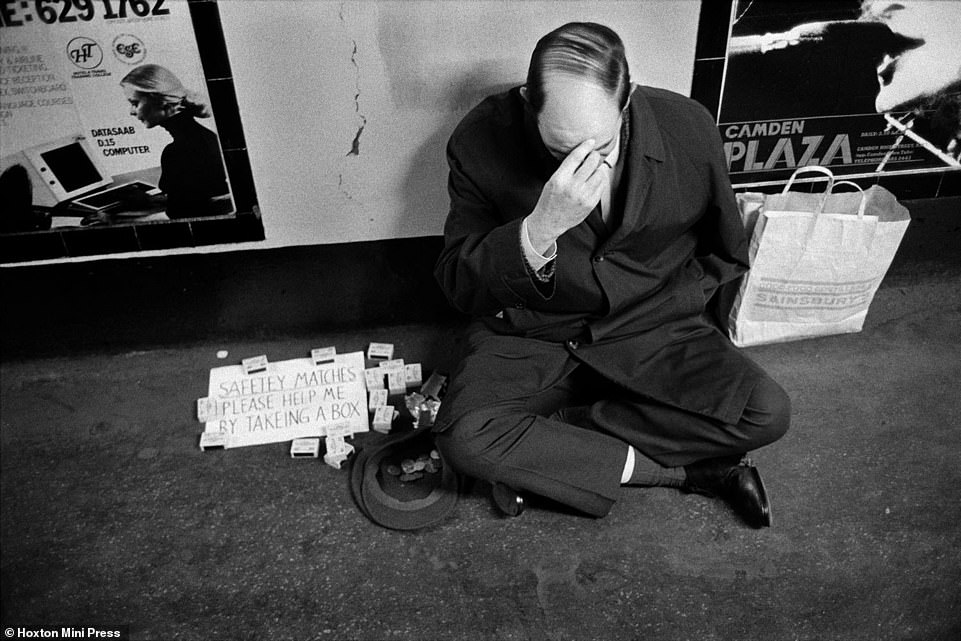 +13
A suited beggar at Tottenham Court Road in 1977 sits next to an old Sainsbury's bag and an upturned flat cap. He has a message which reads: 'Safety matches. Please help me by taking a box.' He sits in front of an early advert for a computer 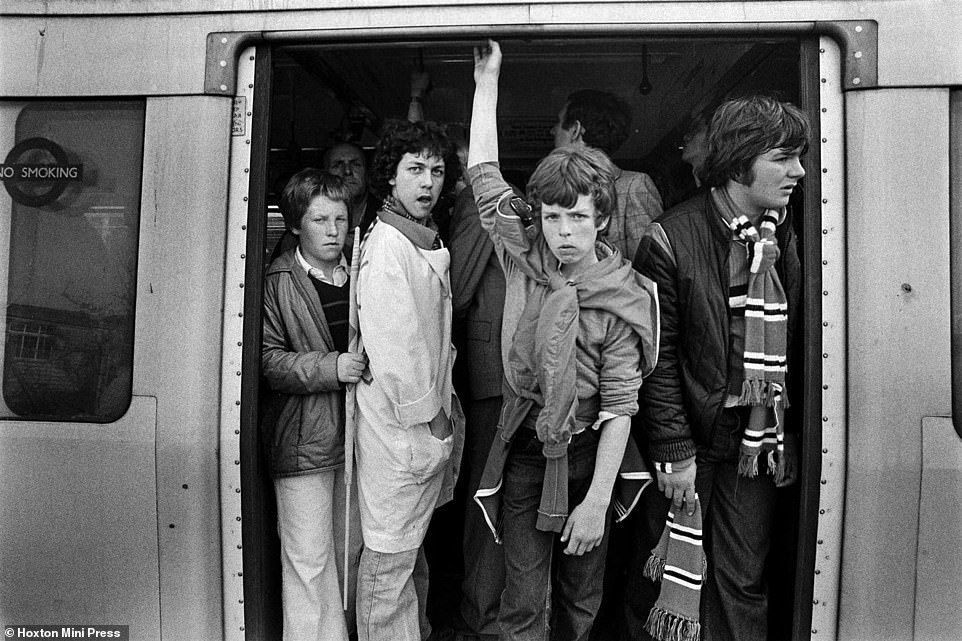 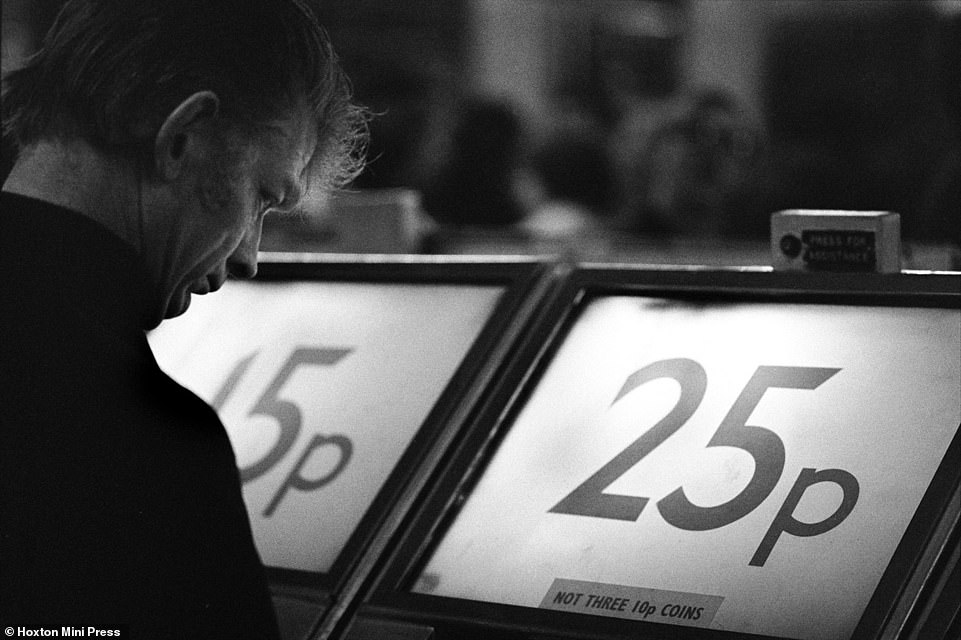 +13
Before floods of people were slamming down their contactless cards on machines at rush hour, commuters had to hand over pennies to buy a tube ticket 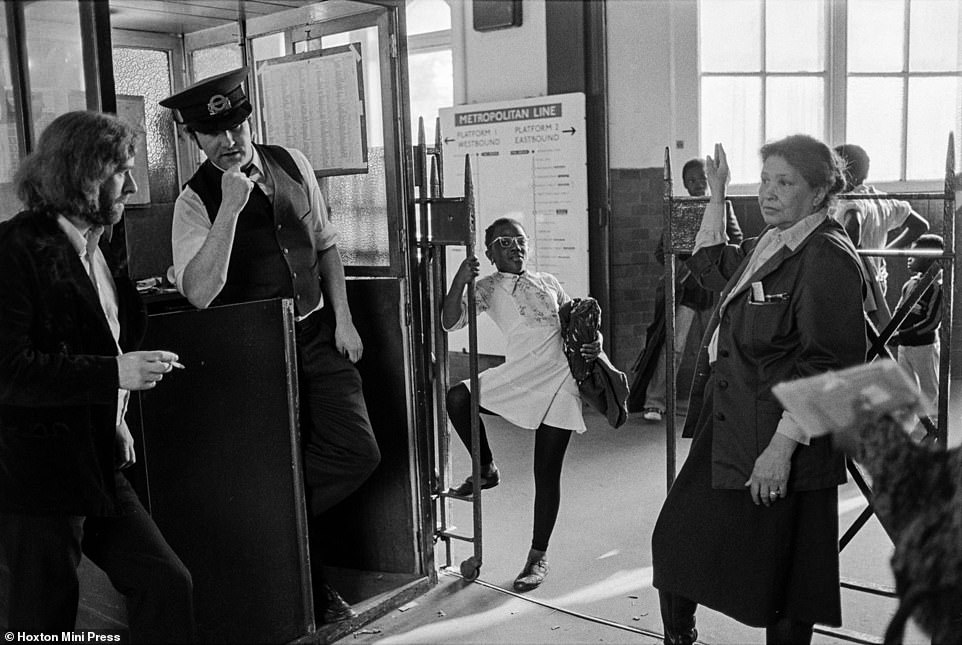 +13
A young girl poses for the camera at Westbourne Park in 1979, while a discussion takes place in front of her between a smoking commuter and a guard. Art writer Lucy Davies writes in the introduction: 'Some stations were lit only by individual hanging bulbs in white light shades, immersing travellers in a dim, Hades-like gloom. 'It made taking photographs incredibly difficult, forcing Goldwater to function at the very limit of his film's capabilities, but it gives his pictures a wonderfully brooding, unearthly cast.' 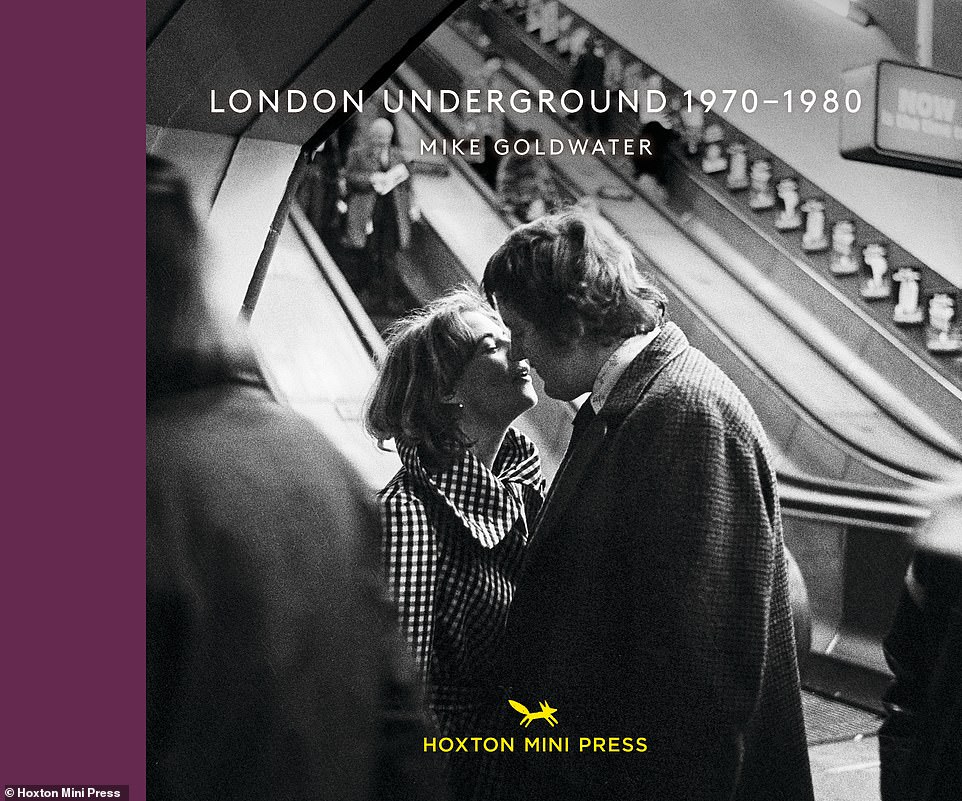 +13
Mind the time gap: Evocative photos show a bygone era on the London Underground - when drivers smoked pipes and even the beggars wore suits