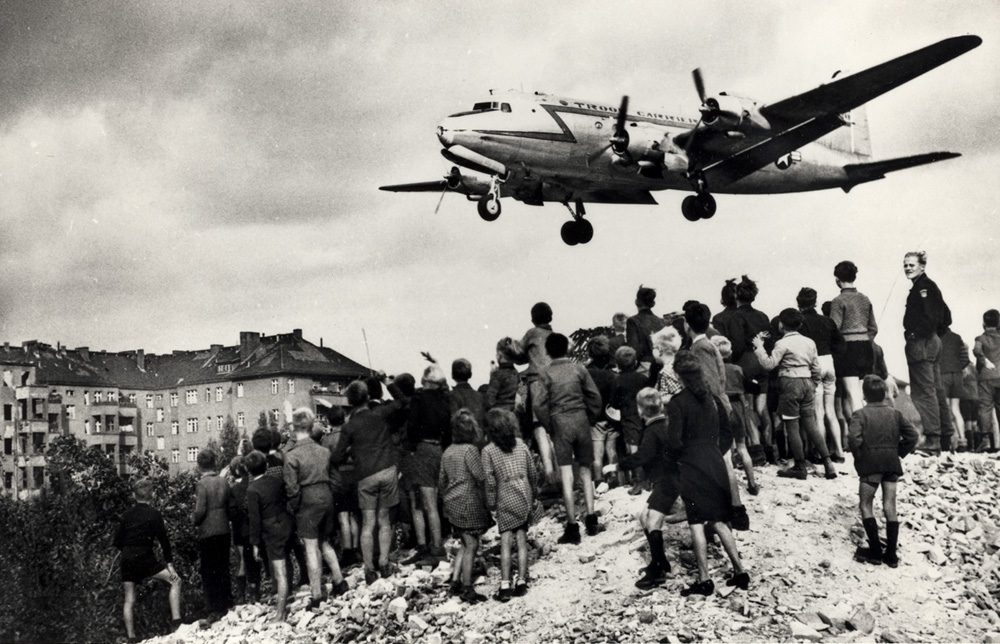 Following the end of World War 2, Germany was broken up and divided among the Allies as one divides war booty. The western half was occupied by the United States, the United Kingdom and France, while the eastern half went to the Soviets. Berlin itself was divided into four zones, but it was completely surrounded by the Soviet-controlled Eastern Bloc. This allowed the Soviets to act as gatekeepers controlling the flow of goods and people in and out of the capital.
In June 1948, the Soviets shut the gates closed. The idea was to starve the people living in West Berlin, which would eventually force the occupying Allied forces out of the city. But instead of retreating from West Berlin, the US and allies decided to drop food supplies from the air. This effort, which lasted for more than a year, came to be known as the “Berlin Airlift.”
Lt. Gail Halvorsen was one of the many Airlift pilots dropping supplies to the starving city. He was also an amateur photographer. On his days off, he often went sightseeing in Berlin carrying his handheld movie camera. One day in July, while at the Tempelhof Airport shooting airplanes, he saw a bunch of kids behind barbed-wire fences on the edge of the runway. Halvorsen approached the children and chatted with them through the barrier for about an hour. Then as he got up up to leave, it hit upon him that none of them had asked him for candy. This was unusual, because throughout the war, wherever Halvorsen went, he was harassed by kids in the streets asking him for chocolates and gum. But not these kids. 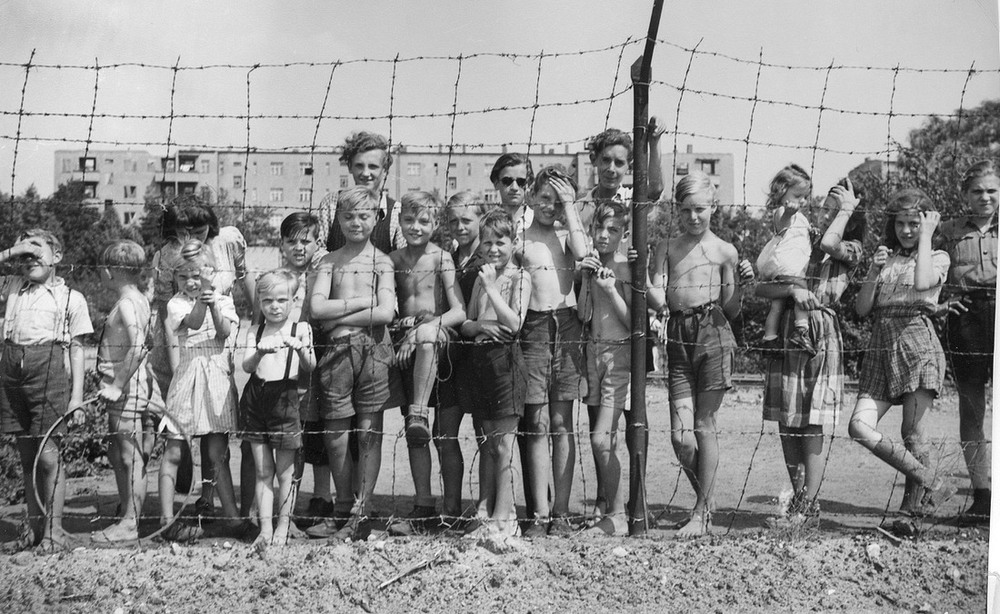 German children wait behind a barbed wire fence somewhere in Berlin. Photo credit: U.S. Air Force
“I’d been dead-stopped for an hour, and not one kid had put out their hand. Not one,” Halvorsen recalled.
“They were so grateful for flour, to be free, that they wouldn’t be beggars for something extravagant. This was stronger than overt gratitude—this was silent gratitude. How can I reward these kids?,” thought Halvorsen.
Halvorsen dug into his pocket and retrieved two sticks of Wrigley's Doublemint Gum. He broke it into four pieces and distributed them among the kids, promising that he would drop more candy the next time he flew. When asked how they would know which of the airplanes was his, he said he would ‘wiggle his wings’.
Back at the airbase, Halvorsen collected candies from his co-pilot and engineer, fashioned small parachutes out of handkerchiefs and tied them to the rations. The next day, he flew to Tempelhof Airport and dropped the cargo over the eagerly waiting children. Halvorsen made these drops once a week for three weeks, and each time the number of children waiting at the airport grew significantly. To Halvorsen’s luck, the airlift commander was more than happy to get behind the effort, and “Operation Little Vittles” became official. 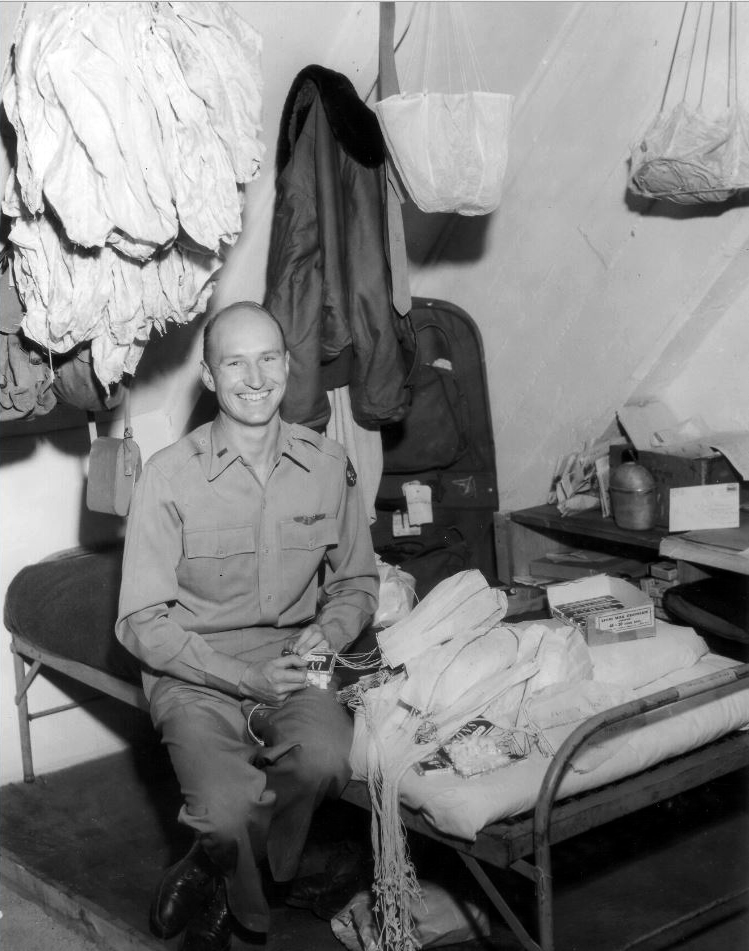 1st Lt. Gail Halvorsen rig some candy bars to miniature parachutes for German children in Berlin as part of Operation Little Vittles. Photo credit: U.S. Air Force
The amount of candy steadily increased as fellow pilots began donating their rations. When the news reached the United States, candies and chocolates began to pour in from all over the country, until Halvorsen could no longer keep up with the supplies. A Massachusetts student offered to take charge of the now national project and worked with the National Confectioner's Association to prepare the candy and tie the handkerchiefs. By the end of the Berlin Airlift in September 1949, Halvorsen, along with other American pilots had dropped 250,000 parachutes and 23 tons of candy.
The American candy bombers became known as the Rosinenbomber (Raisin Bombers), while Halvorsen himself became known by many nicknames to the children of Berlin, including “Uncle Wiggly Wings”, “The Chocolate Uncle”, “The Gum Drop Kid” and “The Chocolate Flier”. 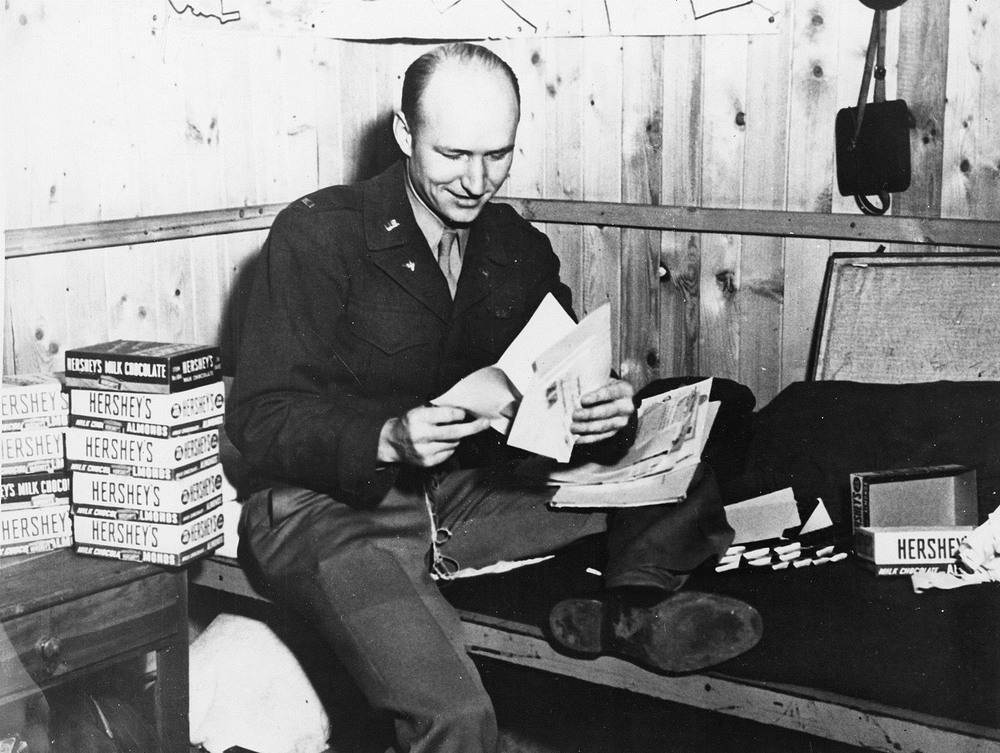 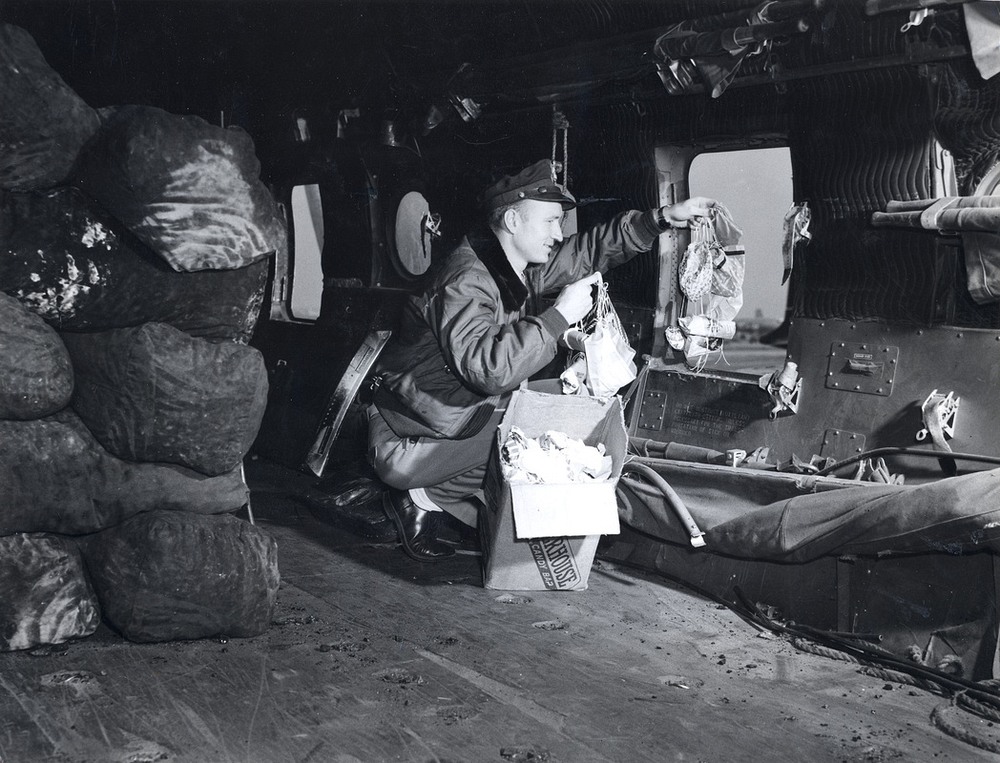 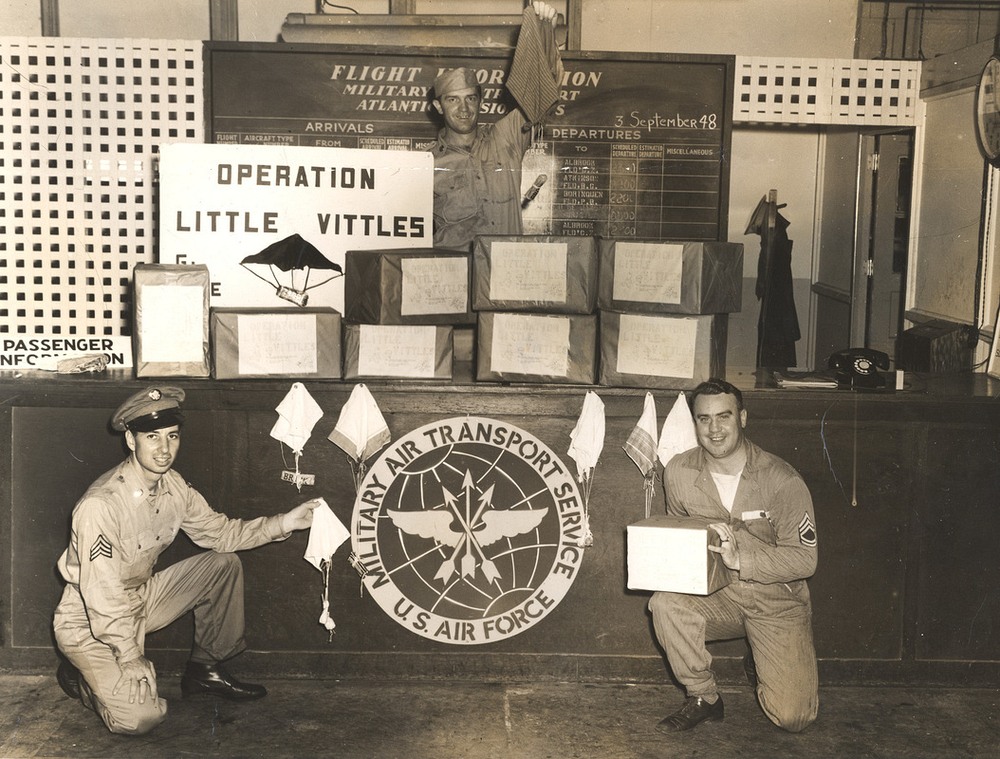 US Air Force pilots pose for a photograph on the occasion of a drop for Operation Little Vittles. Photo credit: U.S. Air Force 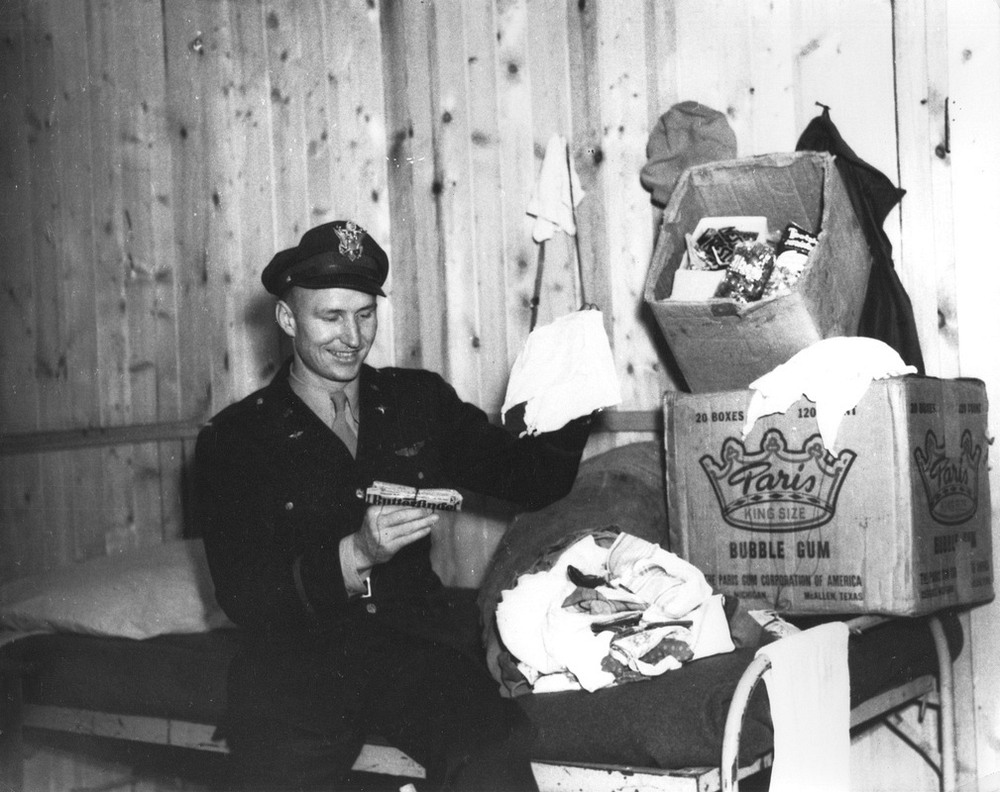 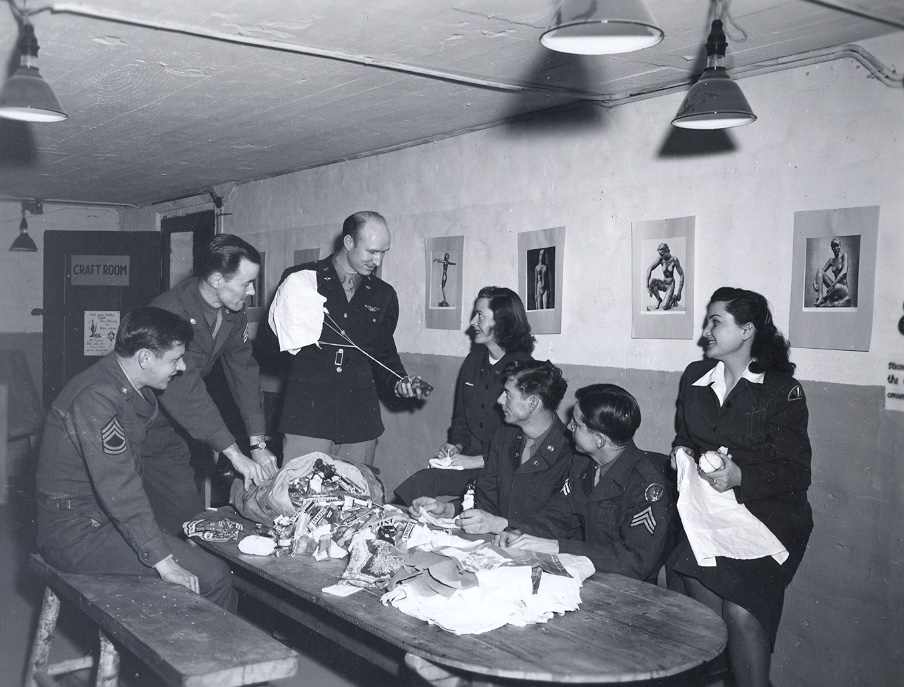 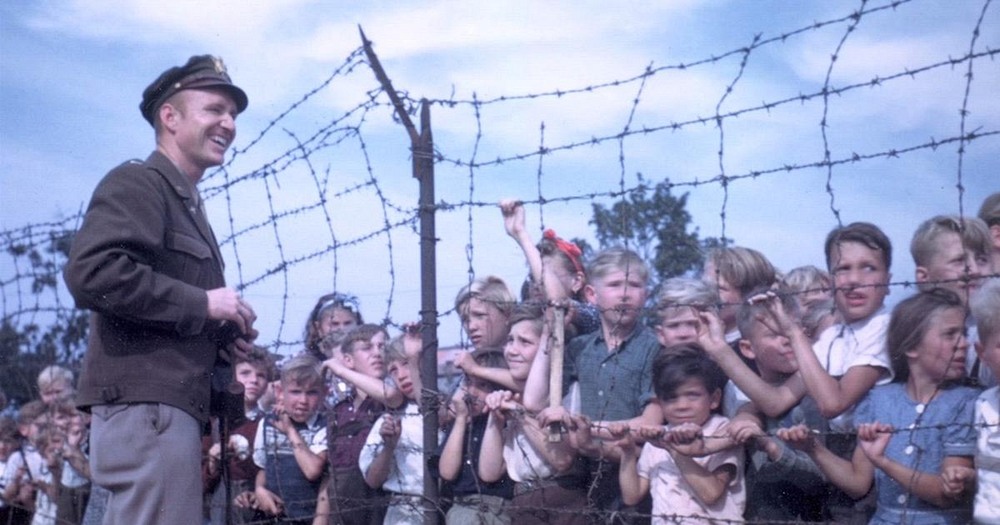 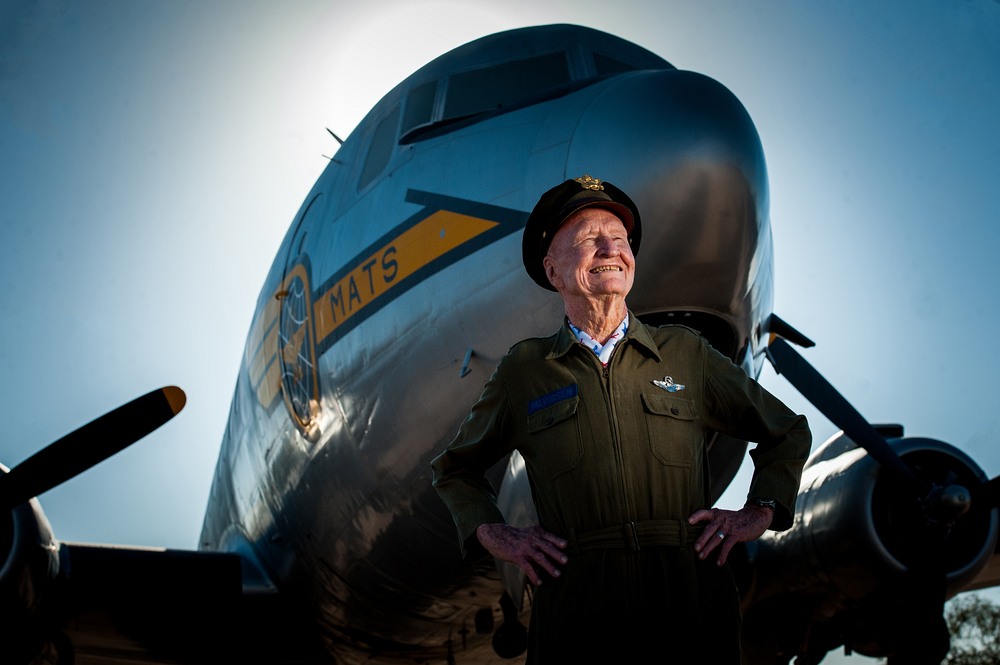