Early warning signs could be flashing bright red for a Democratic Party hoping to defeat President Donald Trump in 2020.
As strong economic trends continue and candidates within the Democratic primary continue their race to the bottom of the barrel in terms of progressive policy, the electorate — particularly within historically left-leaning Rust Belt states — appears to be growing more and more confident in the prosperity of America under Trump.
In fact, some members of that electorate are growing so bold in their support that they are happy to tell just about anybody about it — even anti-Trump CNN.
Speaking on live television, one Michigan woman combatted the left-wing media’s anti-Trump impeachment narrative directly in conversation with CNN election correspondents.
“I think it’s a sham,” the woman told correspondent Jason Carroll on Tuesday, referencing impeachment proceedings against the president. “The president is doing a great job.”

“I think it’s a sham…the President is doing a great job.”

Voters will not be fooled by #ShiftySchiff and his partisan #WitchHunt 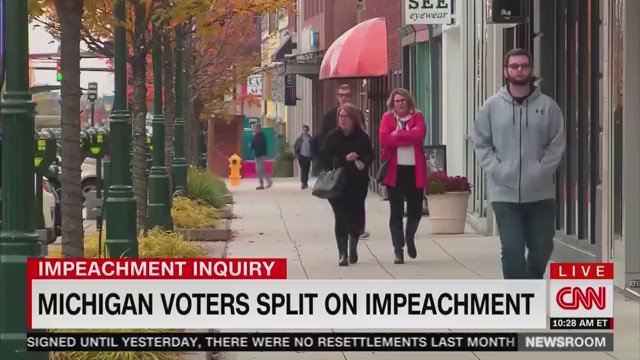 2,395 people are talking about this

“It’s the Democrats who deserve to have what’s coming to them…for undermining a president who has done so well on the economy.” 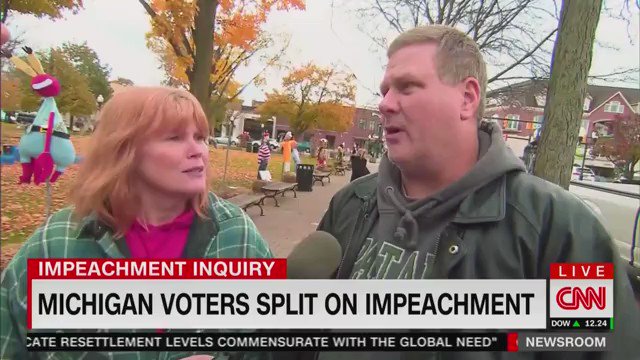 1,740 people are talking about this
Dunning and company were not the only Michigan natives to show staunch support for the president while talking to CNN either.
UPS worker Steven Plate told Carroll that the Democrats’ attacks on Trump have only served to damage a strong presidential track record and hurt the American people.
“Look at the real estate,” Plate said. “I mean, a house goes on the market, it’s gone in a week.”
“The economy is just booming,” he added.
The Trump economy — far from diving into the recession left-wing economic alarmists foretold some months ago — is continuing to make great strides for Americans of all races, colors, creeds and party affiliations.
Unemployment — particularly in black and Hispanic communities — has fallen consistently under Trump, with the past three months seeing repeated record low unemployment not seen in the black community since the 1970s.
October also saw GDP growth for the third quarter of 2019 surging well above the 1.6 percent expansion projected by Dow Jones economists.
According to a July report from Forbes, manufacturing is also on the rise over the past three years — a key point of focus for Trump’s 2016 campaign, which allowed for the flipping of several Rust Belt states generally held to be Democratic in recent electoral history.

More winning numbers that will help secure #FourMoreYears for @realDonaldTrump!

12K people are talking about this
According to Trump campaign manager Brad Parscale, the tremendous impact of this indiscriminate economic resurgence across the United States is not lost even on heartland Democrats.
Parscale tweeted demographic data Sunday on the recent Mississippi “Make America Great Again” rally, showing that the president managed to pull in an audience where one in five members were black and approximately one in four were Democrats or citizens not typically energized enough to bother voting.
“More winning numbers that will help secure #FourMoreYears for @realDonaldTrump!” Parscale wrote.
“Continue to outperform 2016.”